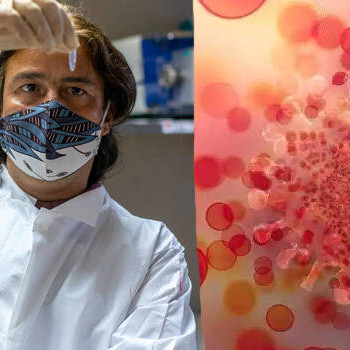 Scientists in France have identified a potentially worrying new COVID-19 variant, IHU, which reportedly has 46 mutations.

According to an article published by The Independent, IHU - the new B.1.640.2 variant, has so far infected 12 people living in south-eastern France.

Researchers, in a paper published on medRxiv, said that the first case was linked to a person with a travel history to Cameroon, western Africa.

However, experts were quick to announce that just because a new variant had been discovered, that did not necessarily mean IHU will prove as infectious as other strains, including Omicron.

''The genomes were obtained by next-generation sequencing. The authors of the paper claimed that the person who was identified with the IHU variant was fully-vaccinated. The person tested positive for COVID after returning from a three-day trip to Cameroon,'' the article said.

The authors of the research paper also note that "subsequent detection... of three mutations in the spike gene to screen for variants... did not correspond to the pattern of the Delta variant involved in almost all SARS-CoV-2 infections at that time”.

Arguing that the emergence of the new variant emphasised the importance of “genomic surveillance”, the authors said their observations once again showed the “unpredictability of the emergence of new SARS-CoV-2 variants”.